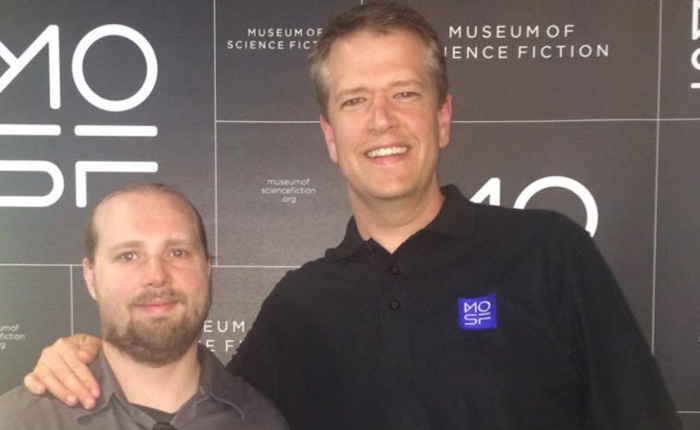 Film graduate and Valedictorian Justin Fick (pictured on left) had the honor to work with The Museum of Science Fiction. Justin with the help of his wife, Kristina Fick, who is an Interactive media graduate and Valedictorian, created videos that shows the behind the scenes of an exhibit being built. The exhibit will feature a spaceship from the famed science fiction book “Eon”, written by Greg Bear. The Museum of Science Fiction will open in 2018 in Washington D.C. http://www.museumofsciencefiction.org

Produced by students and faculty, “The Healer” is a fantasy drama directed by film instructor Michael Pearce. This full length feature movie was made on the latest in Film-making technology, the Sony F55, 4K camera.

Living Arts College will be hosting an evening of film screening for celebrated Cinematographer, Lighting Designer and Producer, Aravind Ragupathi on February 25th, 2016. As an 18-year veteran with over two dozen festival wins, several feature films and independent productions to his credit, Aravind’s work has landed him in productions in Los Angeles, San Francisco, New York, Kansas, Virginia, North Carolina and in his native India.

His extensive portfolio as a Cinematographer includes features, narratives, industrial and music videos for leading film production houses. He is an eight-time Telly Award winning Cinematographer / Producer. Hundreds of his photographs and write-ups have been published in leading magazines and newspapers in Asia and around the world.

Aravind’s interest in American history and culture motivated him to collaborate and produce compelling stories involving the American Civil War, African-American history, the Civil Rights Movement and neo-American stories. In 2015, he produced two unique projects which share a unique perspective centered on war and personal relationships.

This screening features “Sons of our Fathers”, a story of a family separated by the American Civil War. A family divided by North and South, with the consequences being devastating life-changing twists and turns. The second film, “Karma’s Shadow”, follows two young GI’s connected by war and circumstance during the Vietnam War. After the war, both men embark on different moral paths that will ultimately bind them together towards a violent outcome, where an action-packed showdown in New York City determines their ultimate fates.

Aravind collaborated with local talent and crew members who contributed to these projects. Director (Karma’s Shadow) Rob Underhill, along with Co-Producer (Sons of our Fathers) Anthony Dowling, celebrate this evening of art with friends and our community. Anyone interested in attending must RSVP to: Aravind@AravindDP.org as seating is limited to this engagement! 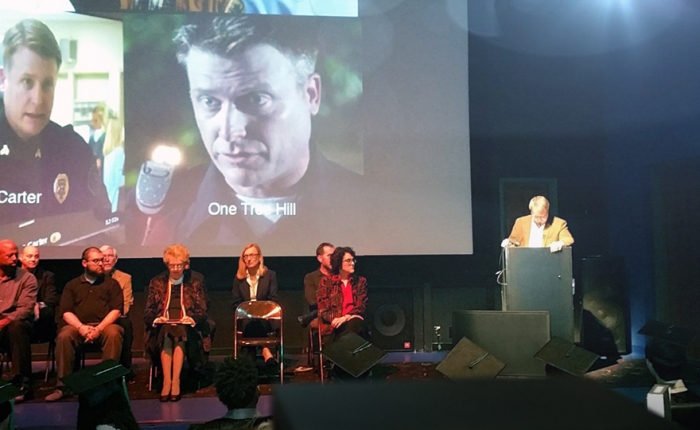 Living Arts College’s graduating class was treated to a guest speaker who has been an actor, director, writer, and producer. Estes Tarver holds an MFA in acting from UNC-Chapel Hill. He is currently recurring on Season 2 of Finding Carter on MTV as Sgt. Hall.

Mr. Tarver has also appeared on such shows as Under the Dome, One Tree Hill, and Dawson’s Creek. Estes coaches actors at the professional level. His acting students have booked major roles on shows and films such as Terminator Genesys, Hunger Games, and Army Wives.

Mr. Tarver’s advice to our graduates (paraphrased): “Do what makes you happy,” “Get out there and network,” and “Follow your dreams.” and he should know. People suggested to him that a move from New York to Raleigh might not be the right direction. Estes makes sure to tell whoever suggests as much that he is doing very well, thank you

June 2013 Uptone Pictures produced a film based on a true story about a union soldier during the civil war who was captured and escaped from a Florence POW camp in 1864. The film was made here in North Carolina at the Stageville Plantation in Oxford. Twenty one days at approximately fourteen hours per day, cast and crew battled the heat, ticks, snakes, mosquitos, and more to film this epic event.

Mike Davis, CEO of Uptone Pictures and a longtime friend of Living Arts College has always been a huge supporter of our faculty and students. He contracted Professor Craig Brandwynne and his company Center Sound Records to provide all of the audio and music needed for the film. Craig hired about 12 students from the college for the project. Some were paid and some were interns depending on their availability and experience. This was a fantastic opportunity for the students to have this type of credit on their resume while attending college. There were some more students that did participate in a limited fashion but they did get some experience.

Our institution is very proud to be a part on this film as it is opening in over 250 theaters around the country and slated for many overseas markets. The following faculty and students were a part of this production. Some are continuing to work on the M&E Track for overseas distribution.

Living Arts College received screen credit along with all of the students that participated in the film.

Today’s filmmaker is moving from treatment to pre-production to production to post to distribution with TOTAL filmmaking experience. 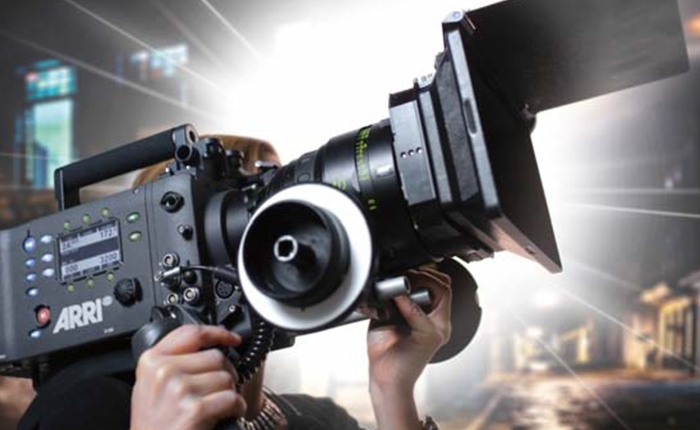 with an all new look and brand new feel, Living Arts Live returns to the front with breaking-in news and details on the latest in Filmmaking, Animation, Photography, Interior Design, Audio Production, Interactive Media and more!